The Secret of Veda

As a mark of celebrating 150th Birth anniversary of Sri Aurobindo & 75th Year of India’s Independence, AuroBharati, Sri Aurobindo Society organized a lecture on The Secret of Veda under the Indian Knowledge Series by Dr. R V Jahagirdar on 16 July, 2022.

The program was started with introductory remarks by Dr. Kishor Kumar Tripathy, Member Secretary, AuroBharati, Sri Aurobindo Society, Pondicherry. He highlighted the vision and mission of AuroBharati including the objective of starting the Indian Knowledge series to explore the rich textual tradition and indigenous knowledge system. Vedas are considered the fountainhead of knowledge and reveal the secret of the universe. Vedic hymns present the ultimate truth in a secret and symbolic manner. As Sri Aurobindo has mentioned “there is always the true and still hidden secret of the Veda,—the secret words, niṇyā vacāṁsi, which were spoken for the purified in soul and the awakened in knowledge. To disengage this less obvious but more important sense by fixing the import of Vedic terms, the sense of Vedic symbols and the psychological functions of the Gods is thus a difficult but necessary task.”

Speaking on the occasion, the guest speaker, Dr. Raghunath Jahagirdar (Managing Trustee of Sri Aurobindo Kapali Sastry Institute of Vedic Culture (SAKSHI) & Trustee of Sri Aurobindo Complex Trust, Bangalore) told that the contribution of Sri Aurobindo is unparallel in the field of Vedas. Sri Aurobindo’s contribution to the Vedas is mainly in unearthing the symbolism of the Vedas. For centuries together people were following the Vedas or they restricted the Vedas that they are useful for chanting on some occasions or the religious occasions like upanayana, marriage and soma yagas, yajnas and so and so forth. But very clearly, Sri Aurobindo has given us the message that Vedas are meant for application. The Vedas are relevant or more relevant to our day-to-day life. 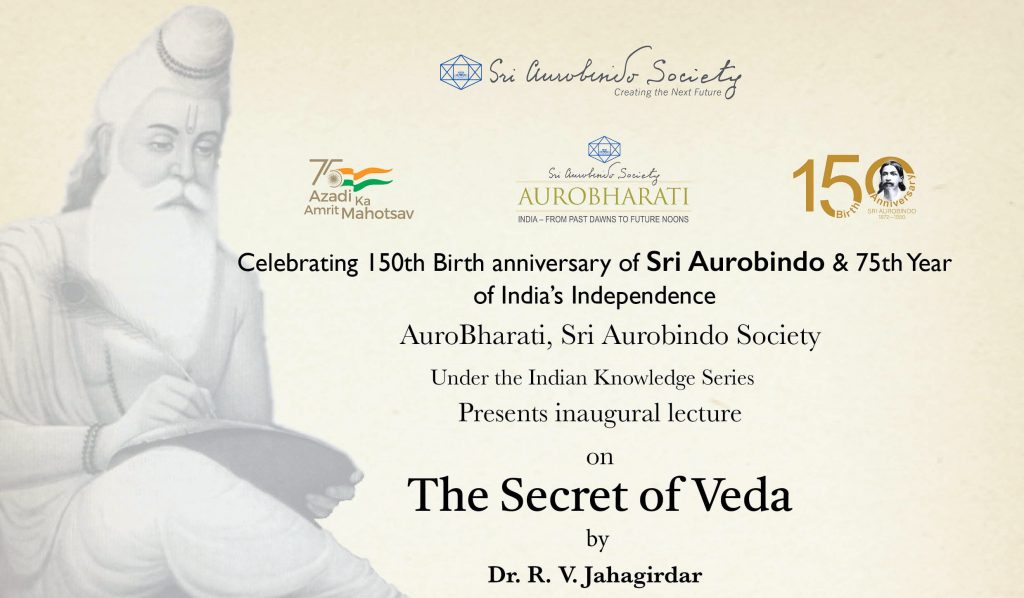 The hymns of Veda are a record of the manifold experience of the seers of the early ages. They touch upon the life of man and Gods at several points of their convergence. Highlighting the works of Sri Aurobindo on the Vedas, i.e. The Secret of the Veda and Hymns to the Mystic Fire, he emphasized the message of Sri Aurobindo that the Vedas are the roots of Indian Civilization and the supreme authority in Indian Religion. He highlighted the eternal foundation of the Vedas with special emphasis on its application for self-development, psychological experience and integral perfection.

Emphasizing on the secret of the Veda, he informed about the key ideas and ideals contained in the earliest books of the Vedas, namely The Rigveda, Yajurveda, Sama Veda and the Atharvaveda. The ancient sages saw the universe as a cosmos governed by a law of Truth, with the Gods acting as the executives to take charge of the various functioning of the universal energies of the Supreme One. The secret of the Veda reveals how to invoke the Gods and make them our collaborators on the journey to the Divine. The real knowledge of the Veda is to break the barrier between the human being and the cosmic powers. Once we understand the unity of the universe, we can more easily answer the question of how to imbibe beauty and harmon y in every aspect of our life.

This message of spirituality given by Sri Aurobindo is explained in this speech including the way in which the Gods of the Veda participated in the life of man, the nature of the interchange and the law of their operations. It helps the seeker to understand the forces which can be invoked to assist the spiritual aspiration and bring it to realization in his life. Spirituality is free of any dogma or creed. Spiritual experience is an experience of the spirit or spiritual consciousness or the consciousness which pervades the entire cosmos including all human activities.

Dr Jahagirdar highlighted that the Vedas are the earliest literary records containing spiritual knowledge encompassing all the aspects of life and an important source of wisdom for mankind. Speaking on Vedic symbolism, he mentioned about the traditional view niṇyā vacāṁsi “the systematic symbolism of the Veda was extended to the legends related of the gods and of their dealings with the ancient seers. Some of these myths, if not all, may have had, in all probability had, a naturalistic and astronomical origin; but, if so, their original sense had been supplemented by a psychological symbolism.” The mantras of the Vedic Samhitas are secret to the extent that we become eligible to understand the secret meaning of the Vedic wisdom. The event was concluded with Sri Aurobindo’s writings on the Vedas:

There is the Book of Being’s index page;

The text and glossary of the Vedic truth Are there;

the rhythms and metres of the stars

Significant of the movements of our fate:

The symbol powers of number and of form,

And the secret code of the history of the world

And Nature’s correspondence with the soul

Are written in the mystic heart of Life.

The event was organized through online mode and more than sixty participants attended the event and shared their valuable ideas/feedback. 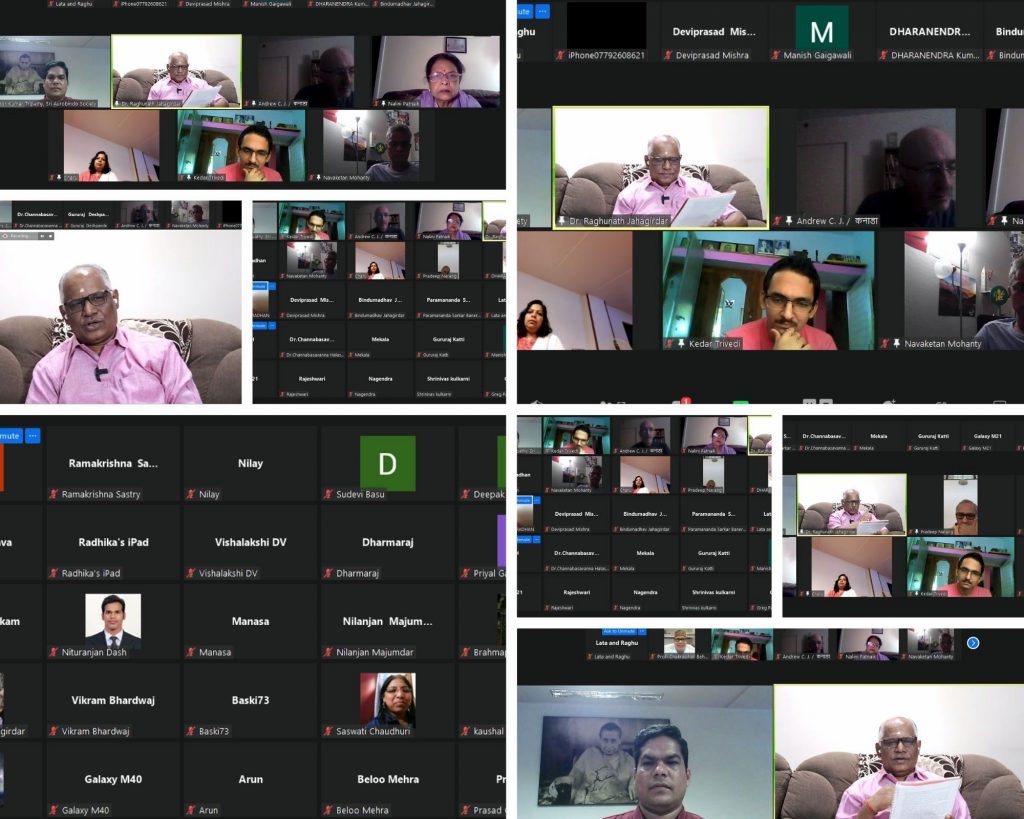 Dr. R V Jahagirdar is Managing Trustee of Sri Aurobindo Kapali Sastry Institute of Vedic Culture (SAKSHI) & Trustee of Sri Aurobindo Complex Trust, Bangalore. After obtaining B.Com. degree he devoted himself to the service of Rashtriya Swayam Sevaka Sangh. The Einstein International University of Florida, USA has conferred on him the degree of Doctor of Philosophy (Ph.D.), for his profound Thesis – ‘‘The Relevance of the Vedas to the Modern Times’’ (2011) and ‘Professor of Oriental Studies’ (2013). He is also the editor of the News Bulletin of SAKSHI, and editor and director of SAKSHI project for translating and publishing all the four Vedas in Kannada, and various Indian languages. Krishna Yajurveda Taittiriya Samhita 1st Kanda and 1st  Mandala of Rig Veda and many other books on the Vedas are his translations completed and published under the guidance of Dr. R.L. Kashyap, which have been whole-heartedly welcomed by all the Veda-lovers. Dr. Jahagirdar has greatly contributed to the up-bringing of many budding writers and translators, through the institutions he worked with. His love for books is further exhibited in his involvement and effort as a chief project officer of the project ‘A Library for each School’ launched by ‘Infosys Foundation’ to supply books to Ten Thousand Schools.